TEXT: JEREMIAH 29:20-32
🔑KEY VERSE “Therefore thus saith the LORD; Behold, I will punish Shemaiah the Nehelamite, and his seed: he shall not have a man to dwell among this people; neither shall he behold the good that I will do for my people, saith the LORD; because he hath taught rebellion against the LORD” (JEREMIAH 29:32).

“Thus saith the Lord” has become a common tune in the mouths of many in our society. There are so many self-appointed prophets showcasing themselves and their ministries on radio, television and the social media. They use high sounding words, push people down under a purported anointing and are always quick to make prophetic declaration on every trending issues in the society. The most unfortunate fact of their life is that they have no knowledge of the God they claim to represent. They have, in turn, made their followers “twice children of hell”. These are impostors and deceivers in the world.

Today’s passage opens with the declaration of God’s displeasure and judgment against three impostors in Jeremiah’s day. Zedekiah, Ahab and Shemaiah arrogated to themselves the office of prophets that God never gave them. God declared them to be adulterers and liars, and placed a curse upon them in Israel for their hypocrisy and misleading utterances. These impostors had something in common; they were all involved in telling the people what they would like to hear.

This passage presents some salient lessons to us. First, God honours, supports and defends His faithful servants. Second, unregenerate minds cannot be used of God to liberate those in captivity. Third, we should be wary of ministers who preach only what people want to hear but avoid the bitter truth of God’s word. Fourth, God will definitely cut off the remembrance of impostors.

Faithfulness to God’s word will definitely draw criticisms and persecutions; but like Jeremiah, we must be resilient in our commitment to the truth. We are to rebuke sin and corruption but should not forget to spread the word of peace in the gospel of Christ to the society in a difficult time like this.

✍THOUGHT FOR THE DAY Test every Spirit and hold on to the truth.

Rebellion in the house of God

Question
Can you in your inward heart honestly claim that you are meek and lowly in heart?

The standard of God is not generational biased. The grace of God in the life of those who lived in the generation past will produce the same virtues in those who live in the modern time🤷‍♂️ 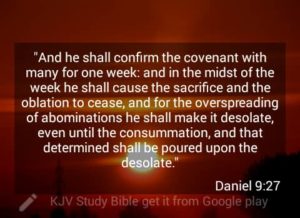